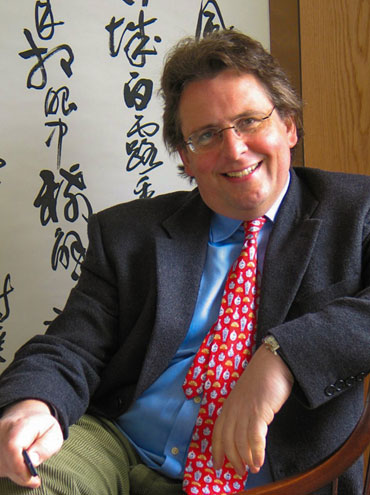 In 1999, after an absence of twenty five years, I returned to live in Leicester with my wife and young daughters. Soon afterwards, Douglas Smith phoned and asked me to judge the annual LSA exhibition. I was deeply impressed by the quality and of talent on show - a vibrant society. It was a difficult task. And so, as no good deed (in Oscar Wilde’s naughty aphorism) goes unpunished, I was subsequently invited to become an Honorary Member of the Society - not long after which I now find myself as its President.

2014 is the year when Stoneywell - the idyllic cottage in Charnwood Forest, built in 1894 by Ernest Gimson for his brother Sydney - opens in the care of the National Trust. Thus the historic ties between county and city are reinforced through our shared ‘ownership’ of Gimson and his works, some of which are now on view in a specially dedicated gallery here at the New Walk Museum & Art Gallery.

In 1884, two years after the LSA’s inaugural exhibition, the young Ernest and Sydney Gimson stayed up late in rapt conversation with William Morris, following his lecture to Leicester’s Secular Society. As LSA president I can only endorse this year’s exhibition with the observation made in the 1880s by the prophet of the Arts and Crafts: "Beauty - which is what is meant by Art, using the word in its widest sense - is no mere accident to human life, which people can take or leave as they choose, but a positive necessity. . ."

William Morris, The Beauty of Life, 1880

Lars Tharp, 2014.
Published in the catalogue to LSA Annual Exhibition 2014

In October 2014 Lars Tharp was elected as the new President of Leicester Society of Artists. Lars Tharp was born in Copenhagen and went to school in Leicester then at Cambridge University he read prehistory archaeology. In a sixteen year association with the Sothebys, he specialised in Chinese ceramics and art, becoming a director and auctioneer at the London auction house. In 1993 he set up his own company, Lars Tharp Ltd. acting as an independent art consultant. Lars Tharp is well known for his contributions as ceramics expert on 'The Antiques Roadshow', and more recently as a regular panellist on 'Quizzeum'. He speaks and lectures throughout the world and has created or presided over exhibitions as curator and museum director.