Leicester Society of Artists was formed in 1881 and since 1897 we have held our main exhibitions at New Walk Museum & Art Gallery. Leicester. 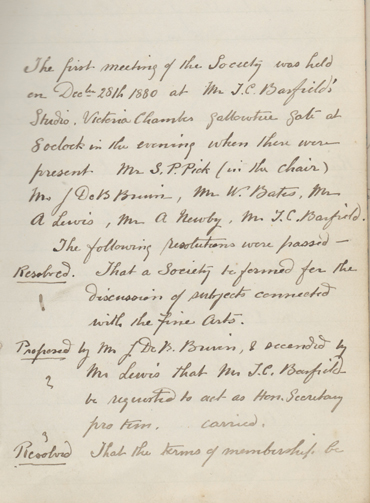 It was eight o’clock in the evening on 28th December 1880 in Mr TC Barfield’s studio in Victoria chambers, Gallowtree Gate that six Leicester men met together. The meeting was discuss the formation of a Society concerned with Fine Arts.  Mr Barfield, who the son of Samuel Barfield, mason, who carved the figures on Leicester’s Clock Tower (1868), was asked to act a Hon. Secretary and under his guidance meetings were arranged in the early months of 1881 at which learned papers were read and discussed.

The first meeting at which sketches were presented took place on 19th June 1881 and it was then decided to form a ‘Society of Artists’.  At the inaugural meeting on 15th July the first officers were elected.  The founder chairman of the new Leicester Society of Artists was Mr G S Catlow, who was then art-master at Wyggeston Boys School, and Mr T C Barfield was officially appointed Hon. Secretary.  At that meeting it is recorded, somewhat enigmatically, ‘rooms were booked and members lent furniture'. 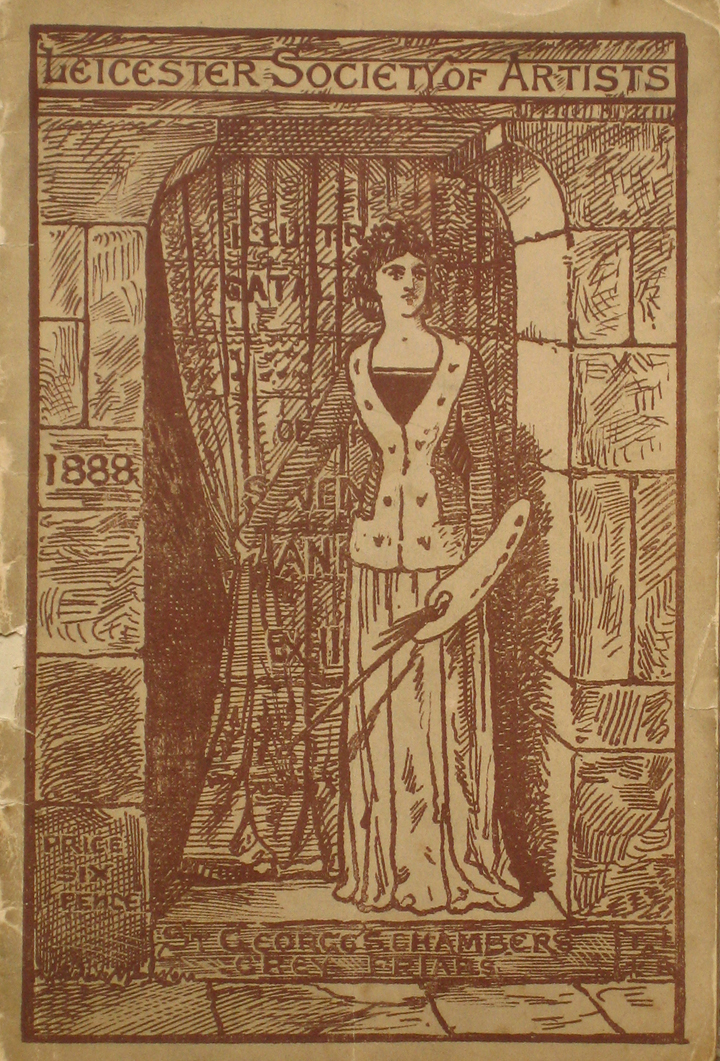 The first exhibition of The Leicester Society of Artists was held in 1882.  The early minutes of committee meetings record the difficulties of finding exhibition space in Leicester.  The early members were very ambitious that the new society should succeed and lost no opportunity to engage the latest speakers and there are references to fledging sketching groups.  The first Headmaster of the new School of Art (now De Montfort University), Wilmot Pilsbury, became the society's President from 1888 - 1890.

Well known artists - particularly those with London connections such as Alma Tadema, Sir James Linton, and Clara Montalba - were sought out as Associate Members of the society and their names are recorded in the Catalogue of 1888.

The first Honorary Secretary, Mr Barfield continued in this role until 1922 and the last surviving member of the original group, Mr HW Bates, died in 1948. 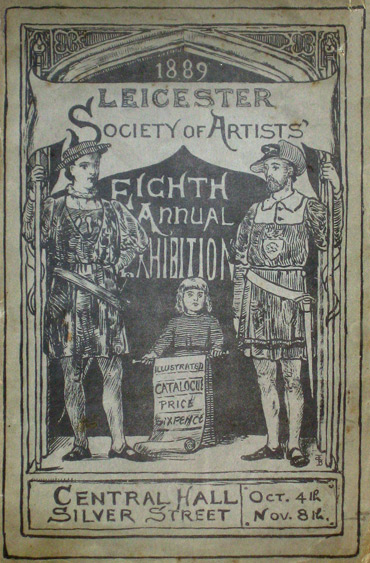 The distinction between members and associates was abolished in 1955.

Early bequests enabled the Society to purchase war bonds and investments which gave the society financial support. A number of awards are presented to artists at the annual exhibition. The  Ellis Prize and Henton Prize were joined in 1961 by the Society of Artists Prize, then by the Guy Dixon Prize, in memory of Deputy Circuit Judge Guy Holford Dixon who was an LSA President, and the George Pickard Prize to commemorate the architect and sculptor George Pickard (1929-1993).  The selector of the prizes changes each year, but is always an external judge of the works in the exhibition. 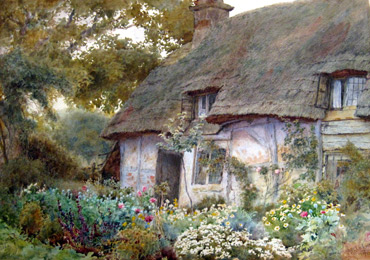 Early members include George Moore Henton artist and early photographer. Born Leicester in 1861 he studied at the Leicester School of Art. His watercolours are accurate architectural records and show details of everyday life in both Leicester in the nineteenth and early twentieth centuries. His expertise with the camera and left acollection of photographs, recording the architectural antiquities of the city and county. Wilmot Pilsbury RWS was was the first Headmaster of Leicester School of Art and President of Leicester Society of Artists in 1888. 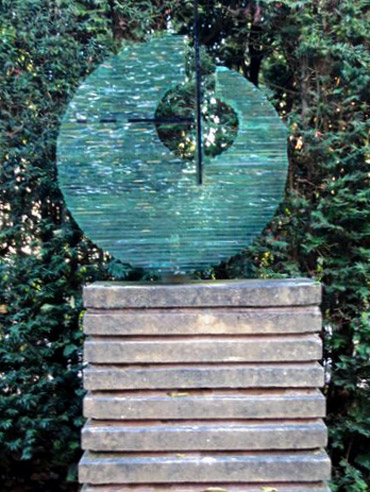 George Pickard RIBA (1929-1993) architect and sculptor. George Pickard studied at the Leicester School of Architecture, then served in the Royal Artillery from 1952-54 as a regimental artist engaged in camouflage design. From 1966-88 he was senior lecturer in interior design at Leicester Polytechnic and he was a founder-member of the Architectural Sculptors Group in 1972. George Pickard made a study of advanced designs and methods in flat glass related sculpture. 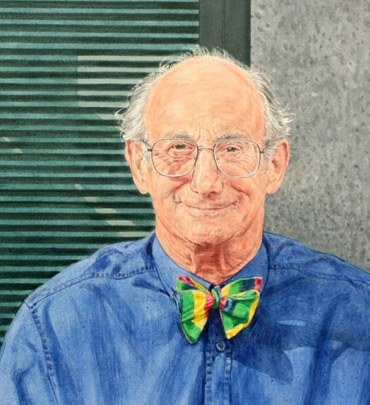 Douglas Smith, architect and painter, was the longest serving President of LSA for 27 years from 1987 - 2014. A public lecture series of high profile speakers, a themed exhibition at New Walk Museum & Art Gallery and the society's first website, funded by the Arts Council, were among lasting innovations achieved during time as President. 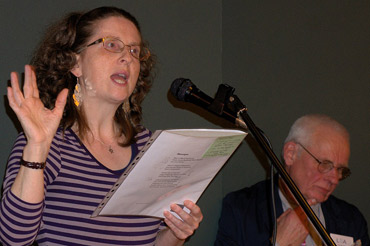 Poet Siobhan Logan at the preview of Drawing on Words

In 1999 we began showing themed exhibitions. Our topics have included German Expressionism, 20th Century British art, Ancient Egypt, Picasso, and War & Peace, all linked with displays in the museum, together with a special exhibition in 2010 to celebrate our own 125 years of exhibitions. Reaching out in new directions, we have taken themes from City of Leicester, Art of Sport in 2009 when Leicester hosted the Special Olympic Summer games, Upcycling linked with the Schwitters exhibition at Tate Britain, and Drawing on Words, a collaborative exhibition with five Leicester poets. 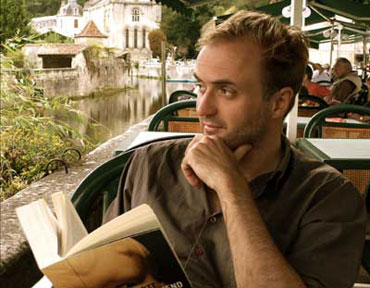 Front cover of David Boyd Haycock A Crisis of Brilliance

In 1983 we started an annual art lecture series featuring critics, artists and curators- read more about this on our Past Lectures page. Well known speakers include Ken Howard RA and Anthony Eyton RA on painting, Michael Howard on Cezanne, and Vivien Heffernan on the Picasso, Eric Shanes on Post-War American Abstract Art and Professor Simon Shaw-Miller about Paul Klee to link the major exhibition of his work at Tate Modern in 2013. In 2014 in commemoration of the First World War the author David Boyd Haycock presented 'A Crisis of Confidence, Young British Artists and the Great War'. 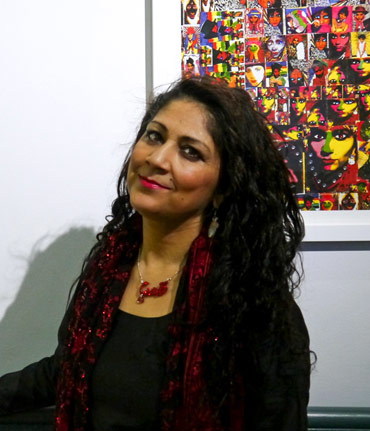 The internationally recognised artist Chila Kumari Burman spoke about her work in January 2015 for the LSA Annual Lecture to accompany her solo exhibition My Rangilla Merry-go-round at Attenborough Arts Centre.

2015 saw the introduction of the LSA Student Award in association with West End Gallery, drawing in students from Leicestershire colleges and universities.