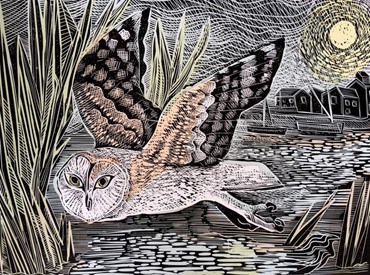 Angela Harding spent a week in residence at Snape Maltings in March 2017 and produced some drawings around the Maltings. These have resulted in 3 new prints as well as a short film about Snape and her work by William Shaw who she have worked with in the past on articles for national publications.

Angela studied Fine Art at Leicester 1979 – 1982 and later obtained an MA in Fine Art from Nottingham Trent University. After leaving college she continued to develop her personal work as well as working in the arts. She was the Director of the Leicester Print Workshop, and has also taught to degree level at a number of higher education colleges. Angela now works solely as a professional artist; her paintings and prints are widely collected and her illustrations featured in many publications, including Country Living.

Walking the dogs is a daily routine that is often the starting point for Angela’s ideas. She works from small sketchbooks, noting down quick drawings of what she sees while out walking, then takes these to the studio and enlarges them onto canvas or develops them into prints. As well as exploring her home county of Rutland, Angela spends a lot of time in North Norfolk. Suffolk, Cornwall and Shropshire are places she visits regularly too, and feature in her work.

Angela says:  ‘The main theme of my work is British birds combined with the British countryside. I have always loved birds, even at primary school I carried around a small orange suitcase that contained my feather collection. This love and fascination with birds has stayed with me. The interest I have is in their form and in the environments they inhabit. My paintings and prints capture a glimpse of the atmosphere they evoke.’  read more

www.angelaharding.co.uk
To view the film about Angela Harding's work for the exhibition by William Shaw click here