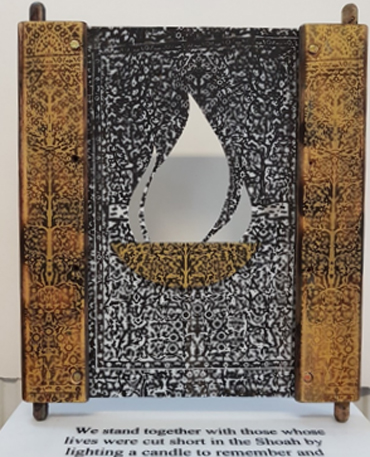 Seventy-Five Memorial Flames have been made to mark Holocaust Memorial Day in January 2020 and the 75th anniversary of the liberation of Auschwitz-Birkenau. In October 2019 George Sfougaras worked alongside the Neve Shalom Reform Synagogue community in Leicester to design and make the sculpture, which will join a group of commemorative flames that will tour the country this year.

The sculpture is based on a Greek Torah from Ioannina and represents the Torah or Tree of Life. For the side supports, he used two screen printing squeegees. The surfaces of the work were printed at Leicester Print Workshop.

George was interviewed alongside Claire Jackson regarding the community’s response to the Holocaust Memorial Day.