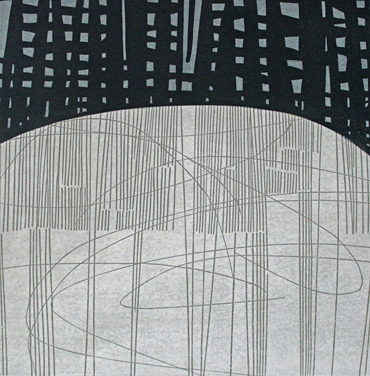 I have roughly two ongoing themes, the sense of self and memory. The former has been with me, fidgeting away in my head for years and I think the memory prints flow from these thoughts," says Fiona Humphrey. 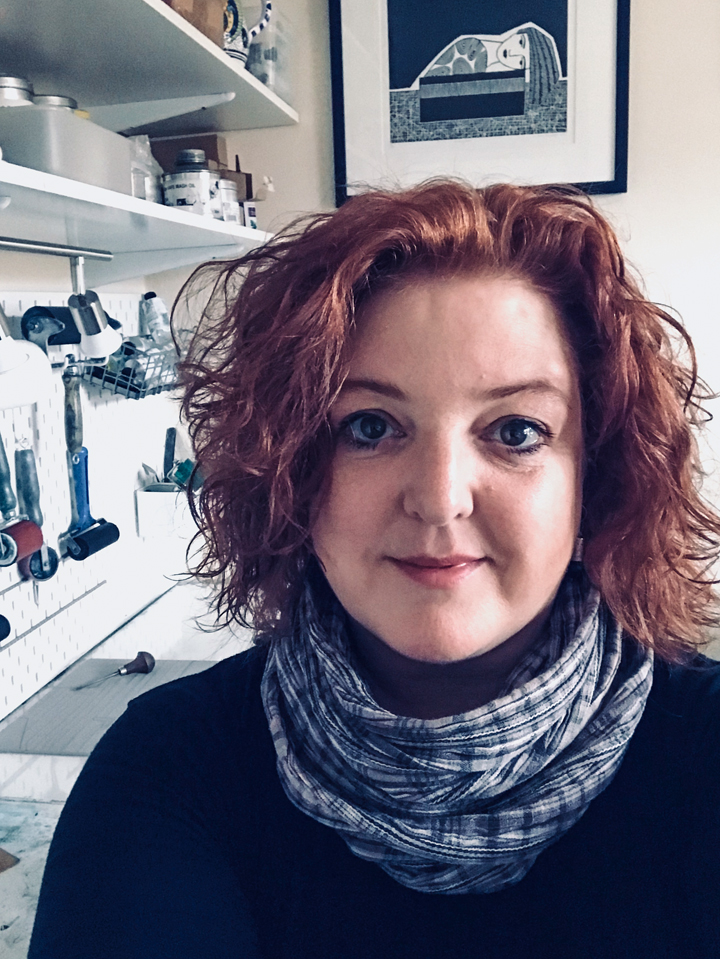 Fiona Humphrey in her printmaking studio

"A monoprint is a combination of the repeatable carved block or blocks with another uncarved block on which I effectively paint the ink", she says. "This means that part of the final impression is unrepeatable – or mono. The two together make a monoprint."

Fiona studied languages and then law, and worked professionally in law, then changed direction to study fine art printmaking. Now a full-time artist working out of her studio in Market Harborough, Fiona has work in galleries in London and Birmingham and an exhibition of her lino prints opens at The Cank Street Gallery in Leicester. 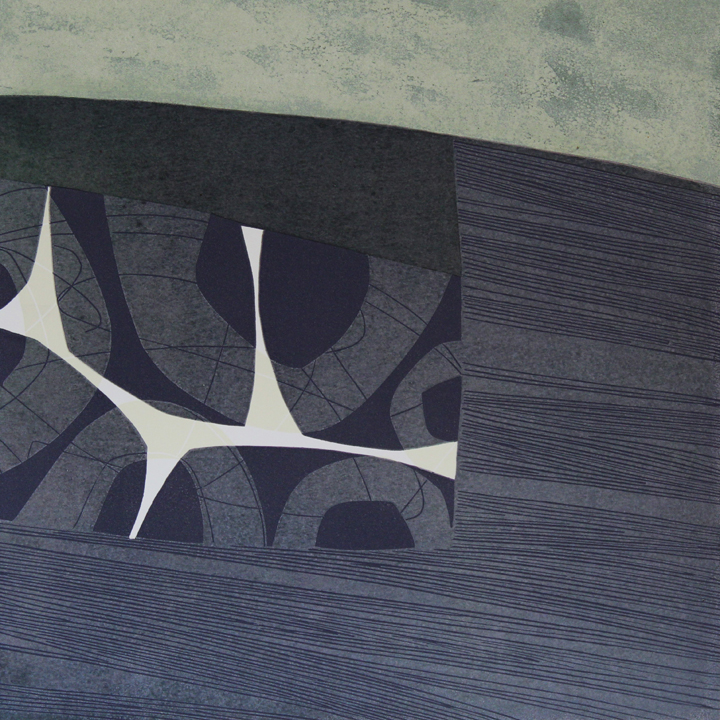 As a printmaker my work involves first drawing directly on to a block of lino, carving and then inking up before putting the block and paper through my etching press. Printmaking is process heavy and time consuming so that it can take a while to complete a piece, from days for a single block piece to weeks and even months for multiple block reductions.

Generally, I will finish a piece over a few weeks, allowing for carving, layering mono blocks and drying times.

My children are still at school, so my day starts and ends with a flurry of packed bags, coats and things to remember. I’m not a morning person and it takes me another coffee to get my head in gear for work after drop-off. I use this time for a social media catch up for my work and for the LSA accounts I manage. I try not to let that drag on too long and then head up to my studio. It’s small but efficient. 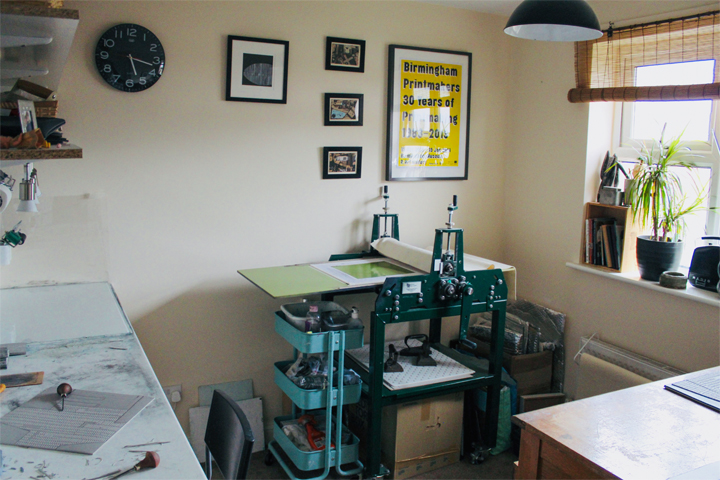 I have to resist the urge to spread or leave things out because there just isn’t the space as it hits critical chaos pretty quickly, so I also have to allow clean and tidy up time before school pick-up in the afternoon. This means my productive working day is usually only about 4 hours. 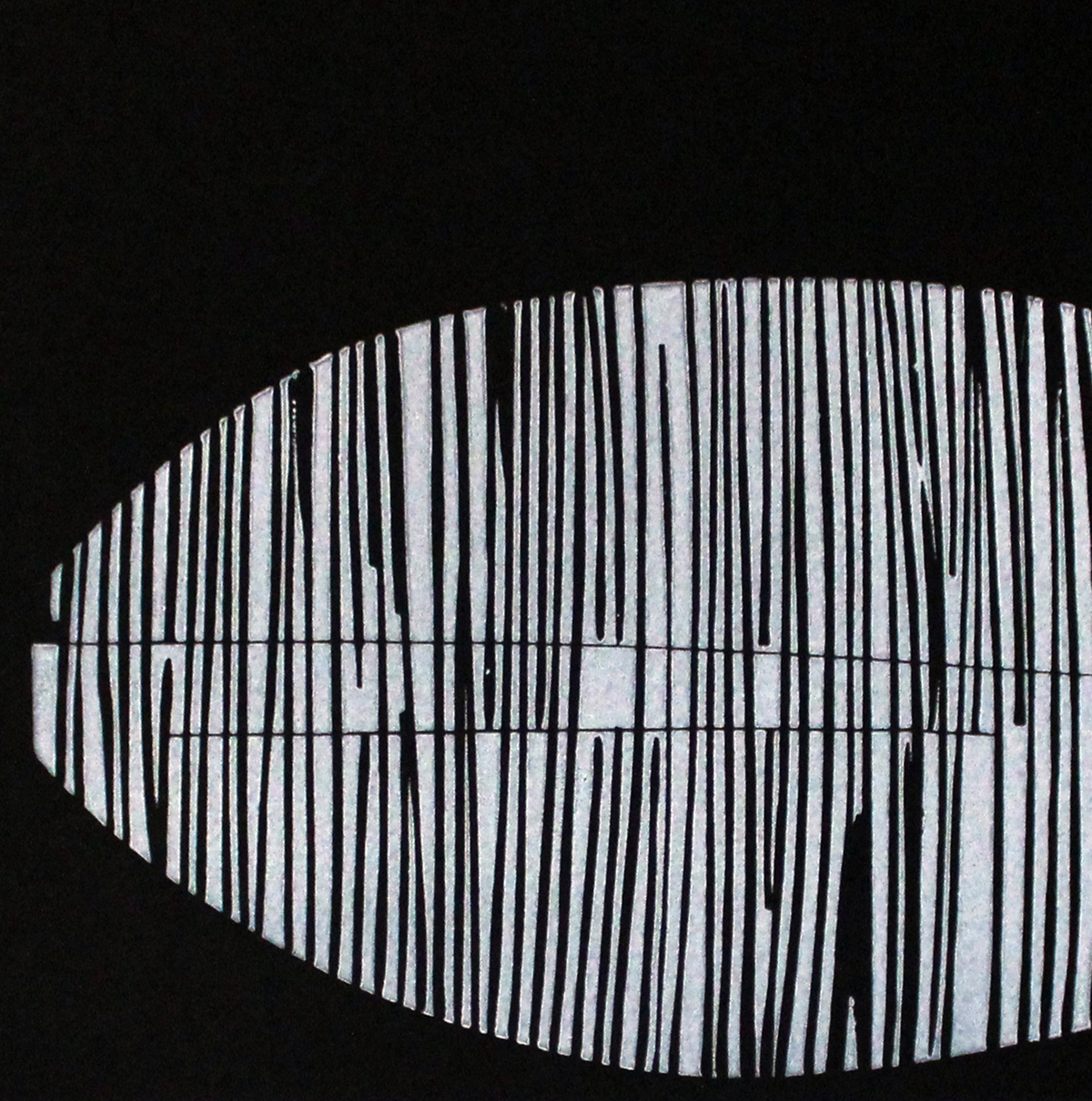 There is no typical day though, it depends what stage I am at in my work. If carving, I can be found at my desk with a cup of coffee and perhaps the radio on in the background.

When I am inking up and printing, I prefer silence, it helps me get into the quiet purposeful rhythm of inking, printing, checking and laying out to dry – and repeat.

I love the ‘reveal’ – that moment when you pull back the paper after it’s been through the press, but I think the most rewarding aspect for me is experimenting with the medium, modifying and layering ink to create something perhaps unexpected from linocut, not for the sake of it, but because I love to explore. 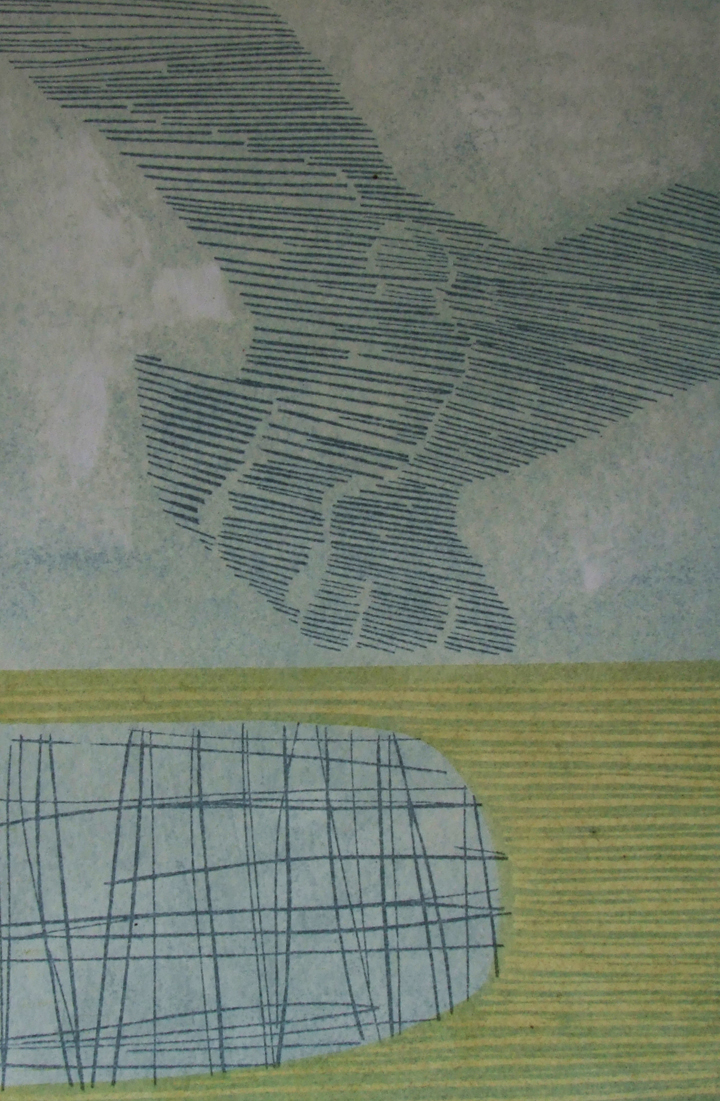 I think this is why I am increasingly drawn to monoprints where I combine the familiar graphic style of linocut with more painterly tones and textures.

Time – the lack of it when I need to switch roles between work and family life.  Stopping and starting brings its own challenges, especially with more complex blocks. I have even abandoned a few blocks when the time gap has been too long to be able to pick up the threads.  I prepare for it now, but it can still be tricky.

A steady hand for carving good clean lines and marks.  I’m glad I took the time to learn how to sharpen my carving tools. Sharp tools are essential. 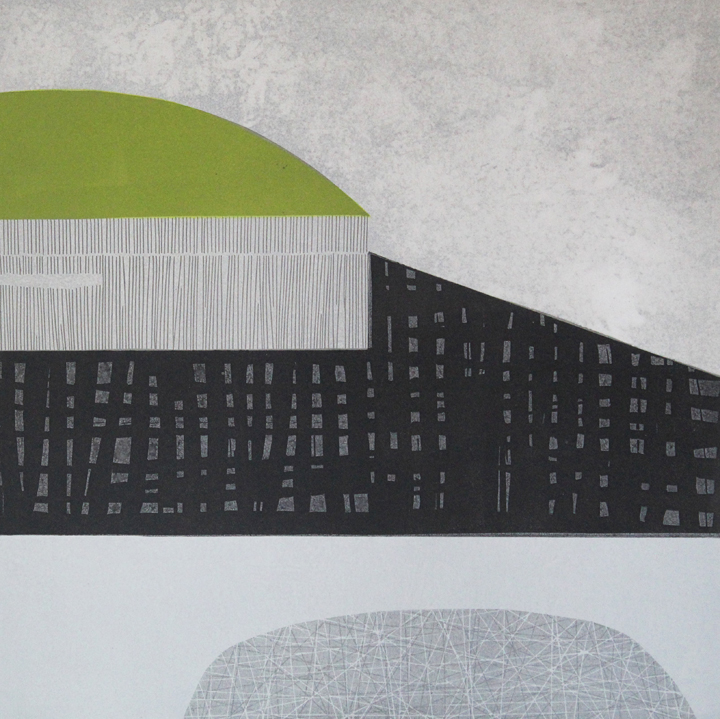 Fiona Humphrey, 'In the Stillness of Quiet', linocut

I think printmakers have to be organised and methodical. You need to be able to see ahead to the final image, then break it down into steps in reverse before you can even begin.

Registration is critical – the lining up of block to block, and blocks to paper, in a way that can accurately be repeated time and again.

I don’t think I did choose, at least not as such.  I have roughly two ongoing themes, the sense of self and memory. The former has been with me, fidgeting away in my head for years and I think the memory prints flow from these thoughts. 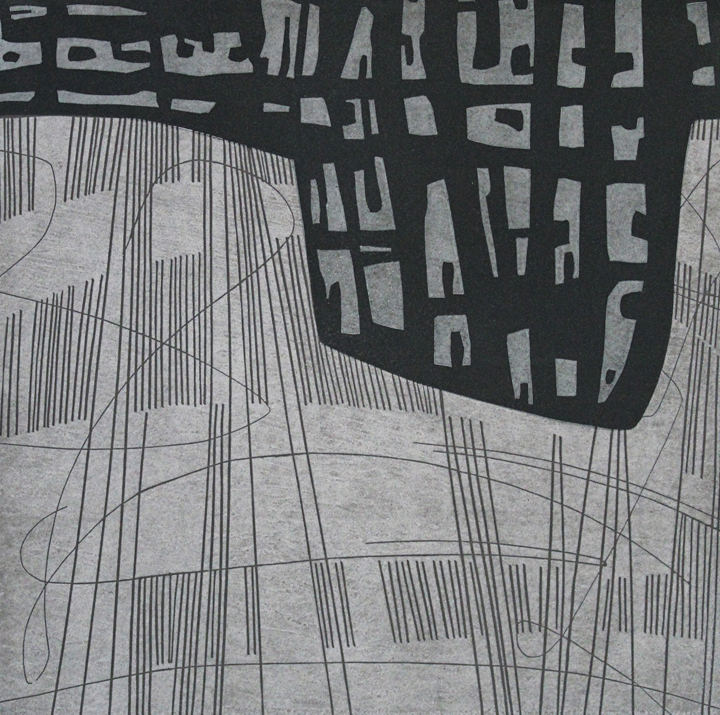 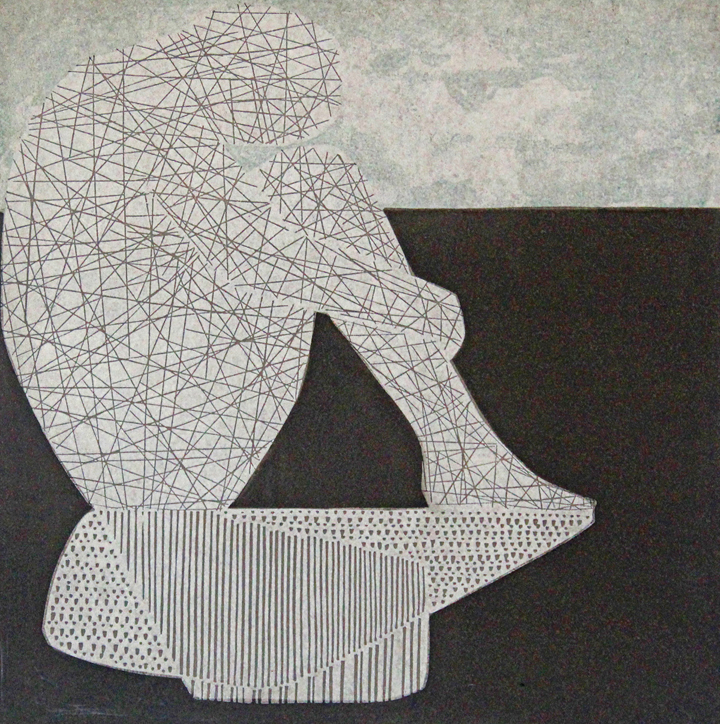 Having first studied languages and then law, I qualified and worked professionally in law before leaving the profession to pursue art.

Since 2005, I have focused on fine art printmaking following a course at the Oxford Printmakers and now work as a full-time artist out of my printmaking studio in Market Harborough.

I was recently awarded the 'Printmaking Today Editorial Prize' at the Royal Birmingham Society of Artists  Print Prize Exhibition 2018. I was delighted to receive such an award. 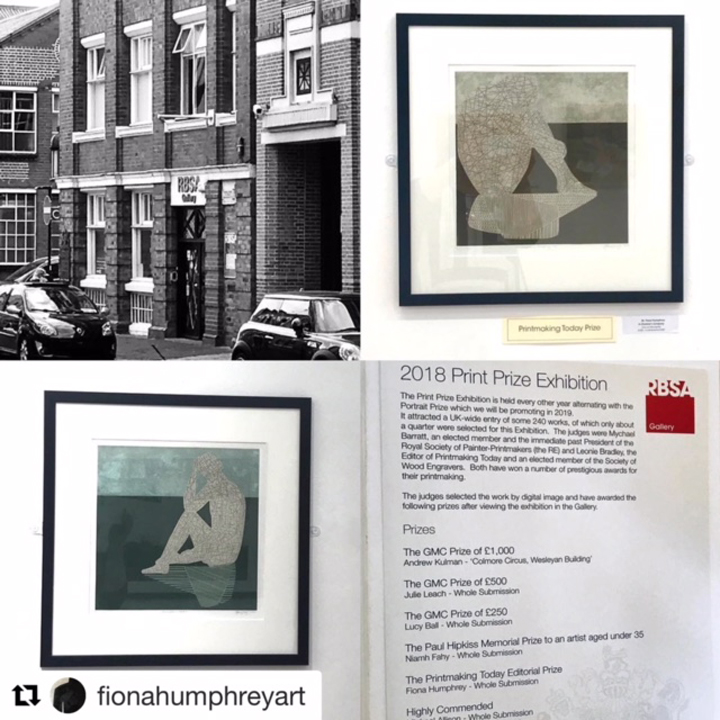 Of course, but nothing monumental.

Probably something about having a go, how it’s ok and important to make mistakes and to choose your own path. 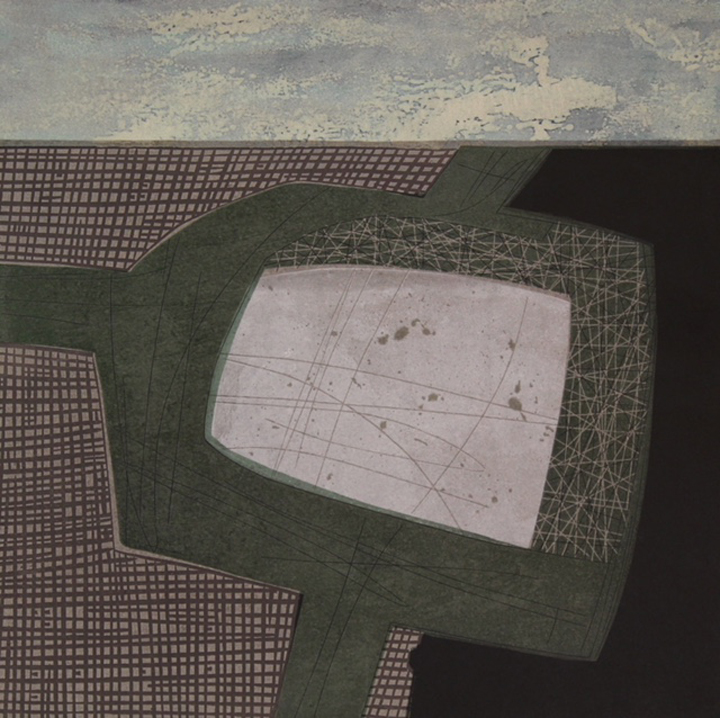 Picasso for his contribution to the changing art scene - that and he helped to raise the profile of printmaking.

Night. I love the quiet and light of early morning too, but I am basically a night owl.

It’s hard to pick just one for any of these favourites and my answers will likely change next time I am asked, but for now… 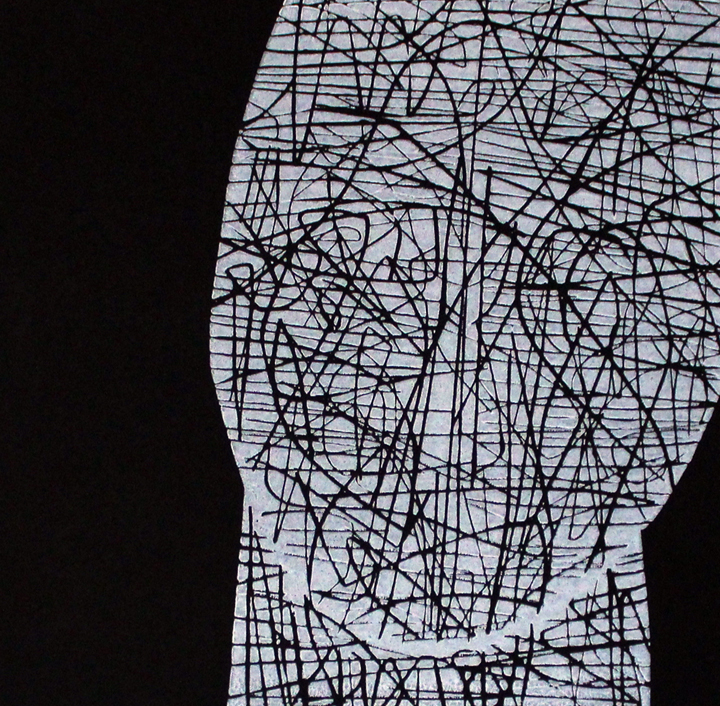 Pixies. Probably the best gig I have ever been to. I think.

Talk Talk – 'Such a Shame'. I think it’s the first record I owned that I still love playing, let’s pretend the ones before that never happened.

On a rapid answer basis alone, Iris Murdoch’s The Sea, the Sea because I couldn’t pick up another book for some days after I had finished it – that must be almost 30 years ago so it deserves the mention even though others are now trying to get a word in. 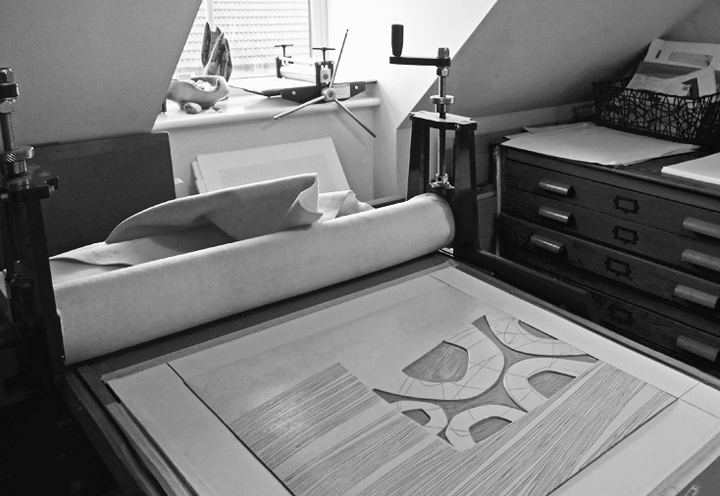 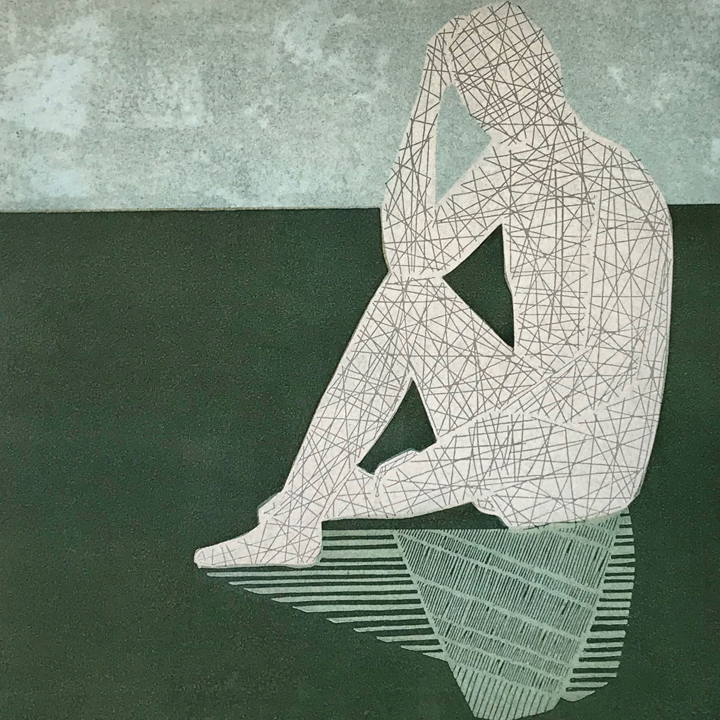 Basically, what the hell, give it a go. 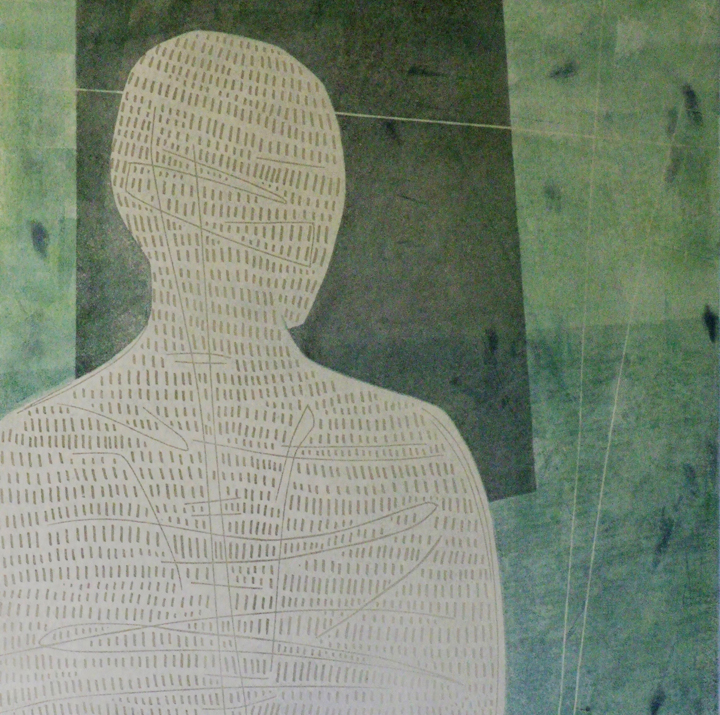 An exhibition of Fiona Humphrey's work opens at The Cank Street Gallery, Leicester:

Somewhere in Between - Linocuts by Fiona Humphrey