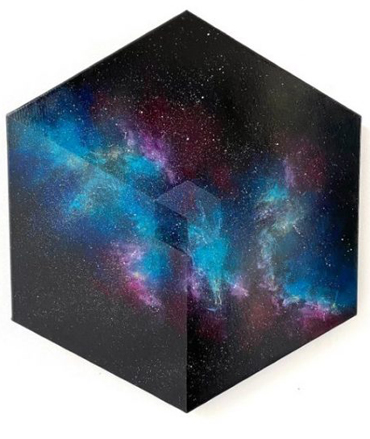 “For small creatures such as we the vastness is bearable only through love.” - Carl Sagan

This exhibition brings together key works from Loz’s ‘Imagined Nebula’ series, which began in 2015 as an outlet for Loz’s increasing interest in exploring the relationship that human beings have with the universe.

Inspired by Carl Sagan’s thirteen-part television series ‘Cosmos: A Personal Voyage’ (1980), the ‘Imagined Nebula’ works grapple with the problem of how to accurately represent something so vast that it is almost impossible to measure or understand, especially when we are a fundamental part of it. The paintings that make up this series portray scenes of an imaginary cosmos, complete with starry constellations and jewel-coloured nebulae.

On public display here for the first time is a new work titled ‘The Cosmos Within’, which consists of 12 life-sized, anatomical models of the human brain. Each model has been painted with different coloured nebulae which Loz has chosen to represent the 12 traceable elements which make up the human body. Nebula are huge clouds of gas and dust that give form and life to everything on Earth. These 12 elements are found both in vast and unfathomable cosmic phenomena as well as the tiniest microscopic particles and forces that hold everything together.